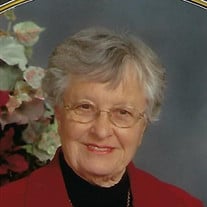 Agnes Lynn (Stephenson) Smith, age 94 of Fort Calhoun, NE Born: February 19, 1924, Hartington, NE Died: September 5, 2018, Blair, NE Preceded in Death by: husband, Clarence A. Smith Jr., son, Tad Scott Smith. Survived by: son, Stephen Reed (Doris) Smith, Fort Calhoun, NE, daughter, Margaret Lynn Pokorney, Matthews, NC, son, Bradley L. Smith, Fort Calhoun, NE, daughter-in-law, Vicki Smith, Omaha, NE, sister, Mary Durrie, Lincoln, NE, nine grandchildren, 12 great-grandchildren, nieces and nephews. NO VISITATION Funeral Service: 1:00 pm Monday, September 10, 2018 at Fort Calhoun Presbyterian Church. Memorials Suggested To: Fort Calhoun Presbyterian Church or Fort Calhoun American Legion Post #348 or Washington County P.E.O. Chapter H.L., care of Dee Drew, 1080 S. 17th Avenue, Blair, NE 68008. Interment: Fort Calhoun Cemetery Agnes Lynn Smith was born in Hartington, NE on Feb. 19, 1924 to Walter and Alma Seim Stephenson. In her childhood she moved to Omaha, NE where she attended Dundee Elementary School. Agnes was a proud graduate of Benson High School. She attended UNO where she met her future husband Clarence Smith. Upon graduation Smitty was called up to active duty in the US Navy. In her junior year Agnes left school to travel to Long Beach, CA to marry Smitty before his deployment for World War II. She returned to wait for her Navy husband and the arrival of her first child, Reed. After the war, they lived short time in Blair, NE. They bought their first home in Omaha, where they resided until Smitty was called back to active duty for the Korean Conflict. While living again in Long Beach, CA they had their second child, Margaret. At the completion of his tour of duty they moved back to Omaha where sons Brad and Tad were born. Agnes was always proud to have been a Navy wife. In 1960 the whole family moved to a farm in Fort Calhoun, where she resided until she was 90 when she moved from her home to Autumn Pointe. In Fort Calhoun she was active in the Fort Calhoun Presbyterian Church, the Washington County Historical Society, the Fort Calhoun Women’s Club, Eastern Star and PEO. In the early 1960’s she went back to college and earned her degree in early childhood education, then she started teaching for Omaha Public Schools. She taught elementary school and while doing that she earned her Masters Degree from UNO and taught for 23 years at OPS before retiring. She loved having Thanksgiving and Christmas at her house and loved having her children, grandchildren, and great grandchildren around including family dinners, rock band practice (the band was aptly named Agnes), craft group, graduation parties and Forth of July fireworks. She will be missed by family and friends. Sievers-Sprick Funeral Home Fort Calhoun, NE 68023 402-468-5678 www.sieverssprickfuneralhome.com

The family of Agnes Lynn Smith created this Life Tributes page to make it easy to share your memories.

Send flowers to the Smith family.