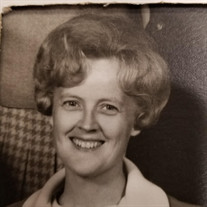 Barbara Jean Richards Rohwer (97) passed away December 13, 2019 from the stress of hip surgery, stroke, being married for 70 years, raising 4 very successful children and mentoring 7 very successful grandchildren, plus volunteering to help many disabled and disadvantaged individuals. Barbara and her husband Bob were longtime residents of Muscatine, Iowa. Barbara was an active member of Trinity Episcopal Church, leading many church sponsored volunteer activities. Her volunteerism led her to accept the challenge of organizing and leading the Volunteer Action Center in Muscatine. Barbara gave her time and talents to develop the organization into an effective means to match people with needs to people willing to help fill those needs. As documented in a Proclamation, April 25, 1977 , “WHEREAS the party of the first part, Barbara Rohwer, hereafter known as Party #1, has diligently and with unheralded valor in the face of opposition trudged ahead in valiant efforts to preserve and prosper the cause of volunteerism in Muscatine (Iowa) and WHEREAS Party # 1 has faithfully fulfilled her fantastically fruitful functions as Director of the Voluntary Action center and WHEREAS Party # 1 has suffered humiliation (and mimeo ink on her clothing) in the line of duty, WE do hereby declare that she be issued the ‘FINE HUMAN BEING CITATION’. Respectfully, Board of Directors, VAC Muscatine Iowa.” Barbara was a strict but loving mother to her four children. She gave them freedom to explore, to learn, to experience danger and to make decisions. She also gave them unbending rules of conduct: Treat others as you would be treated, say please and thank you, wipe your feet and don’t slam the door, open doors for ladies (to the boys) and act like a lady (to the girls). Barbara’s love and confidence in her husband allowed her to step out of her comfort zones and to travel extensively with him. She went with him to civilized places such as New York, where they stayed in nice hotels and took in shows on Broadway. But she also went with him to camp in wild places in the Rocky Mountains. She studied the culture of China and Japan extensively and thoroughly enjoyed being part of the “People to People” program when their turn came to travel to those countries. After the kids left home, Barbara spent her summers hosting family and friends at the family cabin in Canada. Barbara had a vivacious courage. She was unafraid to stay alone at the cabin, which was located in a true wilderness in NW Ontario. Bears were a reality, as were wolves. Neighbors were few. Barbara expertly drove an 18 foot Crestliner motorboat to take people fishing, water skiing or sightseeing. She was a true pioneer woman in a time before the GPS and cell phones. In those days, when you struck out into this 10,000 square mile lake, you were on your own. Barbara embraced adventures and made them fun for all who were with her. After Bob retired, he and Barbara moved to Jackson, WY. Once again, Barbara was involved with many church activities. Both she and her husband worked hard to raise money for a new building for St.

The family of Barbara Jean Rohwer created this Life Tributes page to make it easy to share your memories.

Send flowers to the Rohwer family.