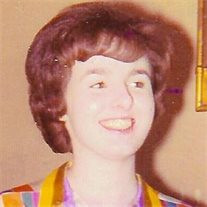 Dixie Ann Humphrey, age 72 of Fort Calhoun, NE Dixie was born on April 9, 1945 and went to be with Jesus on November 29, 2017. The funeral service is Monday, December 4, 2017 at 10:00 am at the Abiding Faith Baptist Church in Fort Calhoun, NE. A visitation is Sunday, December 3, 2017 from 6:00-8:00 pm at Sievers-Sprick Funeral Home. Interment is at the Fort Calhoun Cemetery. Memorials are suggested to the Abiding Faith Baptist Church. Dixie was born to Robert and Muriel Burns. On November 11, 1967 she married David E. Humphrey in Fort Calhoun, NE. She worked at Mutual of Omaha. She sold Avon for many years. She loved the social aspect of selling Avon. Her love for people was served well by her next job as a mail clerk at the Fort Calhoun Post Office. She later transferred to the downtown Omaha Post Office where she gained wonderful lasting relationships with her co-workers. She retired in 2011. Dixie had many close friendships and life long friends from high school on. She attended the Catholic Church for many years and had many great friends from there. She became a born again Christian and spent the rest of her life attending church at the Abiding Faith Baptist Church in Fort Calhoun. Nothing on earth was cherished more than her relationship with Jesus. Her relationships with her dear friends were super important to her. She was most happy to spend time with her dear grandchildren, Caitlin Weiberdink, Spencer Humphrey, Kara Morgia, Lily Humphrey and Cooper Humphrey. Dixie also had a great passion for all things baseball. Her home was a joy with many flowers and plants to enjoy on her lawn and garden. She is survived by her son, Troy Humphrey, brothers, Gary, Tim and Kevin Burns, ex-husband, Dave Humphrey, and numerous grandchildren, nieces and nephews. She is preceded in death by her parents, Robert Leo and Muriel Grace Hobday Burns, and her wonderful dearly loved and cherished son Todd Humphrey and brothers, Bob and Paddy Burns. Sievers-Sprick Funeral Home Fort Calhoun, NE 68023 402-468-5678

The family of Dixie Ann Humphrey created this Life Tributes page to make it easy to share your memories.

Send flowers to the Humphrey family.