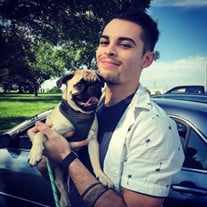 Justin Tyler Hardwick, age 25 of Omaha, NE. Born: October 21, 1995, Ellsworth AFB, SD. Died: March 15, 2021, Omaha, NE. Preceded in death by: great-grandmother, Velma “Dutch” “Grandma Grape” Mullanix, grandfather, Eldon Hardwick, adopted grandfather, Larry “Pops” Stute. Survived by: parents, Troy and Laura Hardwick, Fort Calhoun, NE, sister, Kristina Hardwick and Michael Bombeck, Wood River, NE, brother, Cody Hardwick, Omaha, nephew, Danny Bombeck, Wood River, grandmothers, aunts, uncles, cousins, friends and his best little buddy, Roach. JT was born at Ellsworth AFB, South Dakota. His father’s career caused the family to frequently move, lending JT the ability to fit in with any situation and make friends quickly. JT left an impression on all that he met, from teachers at Leadville Colorado to fellow students at Paxton High School, Paxton, NE. JT flourished at Paxton, honing his leadership skills by being elected the Senior Class President and the Student Council President. We are certain him standing in front of the entire student body, after only being there 2 weeks, and singing “Eye of the Tiger”, earned him the most votes. JT went on to further develop his leadership skills by joining the Army Reserves in 2013. He followed his father and grandfather’s footsteps by proudly serving his country that he loved. He completed boot camp, at Fort Benning, GA, during the summer of his Junior and Senior year of High School. After graduation from Paxton High School in 2014, JT attended Individual Training at Fort Leonard Wood, MO. After completing his 11-week training, JT graduated as a Chemical Operations Specialist. JT was prepared to move on to his next challenge in his life. He received an honorable discharge. JT applied to and was accepted to Syracuse University in New York. He spent a semester at Syracuse before deciding to return home and attend University of Nebraska-Omaha, where he studied Political Science and joined the Sigma Phi Epsilon Fraternity. JT made some strong relationships with his fellow SigEps and he cherished those relationships dearly. JT worked at Builder Trend as a Business Development Representative. A company he quickly came to love and was enthusiastic about. JT loved the daily challenges, the comradery and as usual, set out to be the absolute best at his job. His desire to be the best was not only for personal reasons, but also because he wanted to see the company grow and flourish. JT was proud to be part of a company that was recognized as being the Best in Omaha. JT’s hobbies included going to the gym, golf, writing poetry, writing and performing stand up comedy. JT had a desire and ability to entertain those around him. A skill he developed in high school, where he was the One Acts Leading Performer during his Junior and Senior years. Those years honed his skill and ability to go on stage and perform at Open Mic nights at local comedy clubs. JT was a rare breed; he had an unmatched intensity that he approached everything with. JT could make you laugh one second and school you on politics the next. JT was not one to back down from a debate, in fact, he probably started most of them. He was loved and will be missed by many. MEMORIAL SERVICE: 10:00 am Friday, March 26, 2021 at Fort Calhoun Presbyterian Church. Social Distancing will be observed and face masks are recommended. INURNMENT: Fort Calhoun Cemetery. Military Honors conducted by the Nebraska National Guard. MEMORIALS: In lieu of traditional remembrances, memorials are suggested to The Hardwick Family. Sievers-Sprick Funeral Home Fort Calhoun, NE 68023 402-468-5678 www.sieverssprickfuneralhome.com

The family of Justin Tyler Hardwick created this Life Tributes page to make it easy to share your memories.

Send flowers to the Hardwick family.