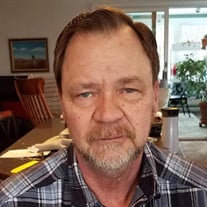 Karl B. Lindholm, age 65 of Omaha, NE. Born: November 30, 1954, Audubon, IA. Died: April 29, 2020, Omaha, NE. Preceded in death by: father, Knud Lindholm, step-father, Eugene Polhemus, brothers, Ed and Lee Polhemus, sister, Sandy (Rip) Green, mother-in-law, Donna Wagers. Survived by: wife, Angela and son, Kirk (Debbie) Lindholm all of Omaha, daughter, Tina Lindholm of Bellevue, NE, mother, Soffia Polhemus of Kearney, NE, sisters, Betty (Steve) Streff, Susan (John) McAdam, Anna Midkiff, brother, Stan (Carol) Lindholm, sister-in-law, Vickie Polhemus, grandchildren, Alexandria Lindholm-Orange, Gabriel Anduze, Karlinya and Kaelan Lindholm, great-grandson, Jayden Morris, many other family and friends. CELEBRATION OF LIFE SERVICE: 2:00-4:00 pm Saturday, June 27, 2020 at Lindholm's, 2683 Blue Bird Lane, Omaha, NE 68112. (402)734-2018. MEMORIALS SUGGESTED TO: The Lindholm Family Captain Karl Benni Lindholm was born in Audubon, Iowa on November 30, 1954 to Knud and Soffia (Benjaminsdottir) Lindholm. He came home to a bossy older sister Betty. Despite that challenge, Karl was always a contented soul and an easy-going little boy with a Mona Lisa smile. When his colicky little brother Stan showed up, he demonstrated his incredible patience that for the most part stayed with him his entire life. Later, the family grew to include a beautiful baby sister Anna, and the six of them fit perfectly around the family table. Too early in life their father died, leaving Karl to grow up fast. From the time he was twelve, he stepped up and along with little brother Stan took over care of the lawn. His dad took great pride in that yard and Karl did his best to honor the legacy. Karl was fascinated by nature, life, and animals. He and big sister Betty had many adventures rescuing baby birds, rabbits and on one occasion, tadpoles threatened by shrinking puddles. Their mother displayed her own saintly patience by allowing the tadpoles to grow to maturity in her big blue canner in the garage. When Karl was sixteen, his mother married Eugene Polhemus. In the bargain, Karl gained a second dad, two brothers, Ed and Lee, and two sisters, Sandra and Susan. "Gene", a pilot and aircraft mechanic, inspired Karl's incredible fascination with flying, a gift that ultimately became his life's work and joy. Karl and his wife Angela were married young and grew up together raising their children Kirk and Tina. Life was full of challenges including disappointing career changes. True to his gritty personality he worked hard at providing for his family and navigated his way through many jobs until he ultimately took to the air, flying huge jets for Atlas Airlines. In his years with Atlas he circled the globe over 100 times and flew to six of the seven continents visiting countries the rest of us could not pronounce or find on a map. He had adventures few of us will ever experience and lots of lonely holiday nights in hotels half a world away from his family. But true to his tenacity, he continued to work hard to make sure his loved ones were well cared for. In 2013 Angela and Karl bought a home on ten acres overlooking the Missouri River. From that perch north of Omaha, he loved drinking coffee while watching the sun come up. Karl delighted in the well-fed hummingbirds that crowded their feeders just outside the deck. It was his happy place. And, he loved a quiet evening on that deck topping off the day with a glass of good scotch or whiskey and watching the stars come out. Karl will be remembered for his keen intelligence, his droll sense of humor and razorsharp wit. His interests were as broad as his travels. He enjoyed fly fishing and taught himself how to hand-tie tiny trout flies using deer hair. He was a hunter, a black powder muzzle loader and developed a website dedicated to the hobby. He loved camping and spending time with Angela in the wilds of Wyoming. There was almost nothing he could not do. As a young boy, Karl spent hours watching his father Knud make beautiful things with his Shopsmith woodworking tool. Karl inherited both the Shopsmith and the talent. For the last several years he poured himself into making their home his castle with his talents for woodworking and electrical wiring among other skills! His schedule sometimes afforded him significant down time. When he wasn't clearing trees, splitting firewood or building furniture, he developed one heck of a knack for smoking meats. This was another time his patience paid off. His highest culinary achievement just might have been his original recipe for Captain Karl's Smoked Chicken marinated in a concoction that includes tequila. Karl loved his wife and kids, his grandkids and great grandson. He took delight when everyone gathered nosily around the table sharing a holiday or birthday or a "just because" meal. He was always a welcoming host and loved having company. On November 30, 2019 Karl retired from the airlines. He was honored with a celebratory water cannon salute in Baltimore for his last flight. When he got home, he immediately threw himself into more projects on the house. He had also lined up a way to continue his love of flying by serving as a charter pilot. His first all day gig was to have been on April 30. He was content, rested and as happy as he had ever been in his life. On April 29, 2020, he simply forgot to wake up. We are all left surprised, shocked, and saddened beyond comprehension. While he was not a church kind of guy, Karl was a believer. We are comforted to know he is watching over us all and that he is regaling those he has met on the other side with good jokes, wise observations, and stories of his adventures around the planet. Until we meet again, brother, save us a place at the table. Sievers-Sprick Funeral Home Fort Calhoun, NE 68023 402-468-5678 www.sieverssprickfuneralhome.com

Please call Angela Lindholm at 402-734-2018 for details and directions for the Celebration of lIfe Service for Karl Lindholm.

Send flowers to the Lindholm family.