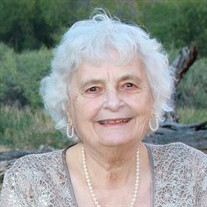 Martha Joyce (Greiner) Fitzgerald, age 78 of Fort Calhoun, NE died on Tuesday, December 11th, 2018 in Omaha, NE surrounded by her children. Martha was born in Talleyrand, Iowa on September 8th, 1940 to Peter and Grace Greiner. She was raised on the family farm east of Lisbon, Iowa. She graduated from St Catherines College in Saint Paul, MN and practiced as a registered nurse for several years. She married Terence Patrick Fitzgerald on December 14, 1968 in Iowa City, IA then settled on his farm in the Garryowen Neighborhood in southeastern Washington County, NE where she spent the remainder of her life. After retiring from the USPS where she worked at a rural letter carrier she pursued her passions of gardening, farming, birding, and travel. She loved all things in nature (except snakes!). She kept a large vegetable garden and was always eager to share its prolific yield. Marty especially enjoyed planting flower gardens. She kept multiple flower beds in her large yard filled with hundreds of varieties of peonies and iris. The beauty and joy those gardens produced over the years will be a lasting legacy. In addition to gardening, she raised sheep, goats, geese, peacocks, and many other animals over the course of her years. She enjoyed bird-watching and through all seasons of the year, would attract an amazing variety of birds to the windows on her home. She took up quilting in her later years and spent many hours creating works of art for her family and friends. She and Terry made it a priority to travel in retirement, taking multiple trips to far-flung places including Australia, New Zealand, Fiji, the Galapagos Islands, Costa Rica, the Amazon, Caribbean, Canada, Alaska, and Hawaii. These trips were in addition to the travel that she and Terry undertook with their family, and in later years by themselves, completing numerous road trips to national parks and beautiful places all around the US and Canada. She had a few passions in her life. She enjoyed ceramics, collecting figurines, commemorative plates, and coins. Her favorite animal was moose, having several figurines and other items with moose displayed throughout her home. She was also a big Husker fan - consistently taking in football, volleyball, and basketball games. Christmas was special to her - it was not unusual for her to have multiple trees on display during the Christmas season. She was extremely proud to have the legacy of her sons and grandsons as United States Marines. Her steadfast faith in God was a central tenet of her life. She sought to praise his glory through all of her actions - whether traveling through his creation to revel in the majesty, or by quietly feeling his presence through daily prayer and devotions. She faithfully attended bible study. She practiced her faith through her words and actions, rarely missing an opportunity to share it with others. She was an active member of Country Bible Church. Preceded in death by her husband, Terry Fitzgerald; her parents, Peter and Grace Greiner; brother Peter Greiner; and sisters JoAnn Arcand, Rita Wendler, Colleen Hawkins, and Jane Carney. She is survived by her children Terry Fitzgerald of Fort Calhoun; Tammy (Chris) Klein of Sioux Falls, SD; Tanya (Tony) Heiniger of Fort Calhoun; and Travis (Jenn) Fitzgerald of Omaha; her grandchildren, LCpl Tyler Fitzgerald, PFC Travis Fitzgerald, Hannah Fitzgerald, Rachel Klein, Ryan Klein and her beloved Basset Hound, Brady. She is also survived by her brother Perry Greiner of Reno, NV; twin sister Myra Kation of Oshkosh, WI; and sister Gloria Schnippel of Indianapolis, IN; several Fitzgerald family members, and many niece and nephews. Visitation: 5:00-8:00 pm Monday, December 17, 2018 with a Sharing at 7:30 pm at Sievers-Sprick Funeral Home. Funeral Service: 11:00 am Tuesday, December 18, 2018 at Country Bible Church in Blair, NE. Interment: Fort Calhoun Cemetery. Memorials Suggested To: The Martha Fitzgerald Family Sievers-Sprick Funeral Home Fort Calhoun, NE 68023 402-468-5678

The family of Martha "Marty" Joyce Fitzgerald created this Life Tributes page to make it easy to share your memories.