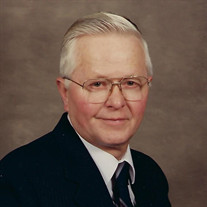 Stanley Gage, age 91 of Fort Calhoun, NE. Born: January 6, 1930, Lyons, NE. Died: April 14, 2021, Fort Calhoun, NE. Preceded in death by: parents, wife, Clara Joan Gage, sister, Edna “Sue” Frey, brothers, John and Roy Gage. Survived by: sons, Duane (Mary) Gage, Ft. Calhoun, NE, Brian (Angie) Gage, Lincoln, NE, daughter, Carol (Cliff) Johnson, Blair, NE, grandchildren, Christopher Gage, Ft. Calhoun, Siera (Gage) and Ron Orman, Maddie Gage, Camry Gage, all of Lincoln, America Johnson, Preston Johnson, both of Blair, NE, brother, Peter (Corrine) Gage, Omaha, NE. Stanley was born on January 6, 1930 to Peter Z. and Elizabeth (Mathiesen) Gage in Lyons, NE. Stanley married Clara Joan Tietgen on January 17, 1953 in Omaha, NE. He served in the U.S. Air Force and was honorably discharged in 1955. They moved to Ft. Calhoun in 1956. Three children were born to this union, Duane, Brian and Carol Ann. Stanley joined the Ft. Calhoun Volunteer Fire Department in 1967. In 1970, Stanley was a founding member of the Ft. Calhoun Volunteer Rescue Squad. Stanley was a brewer at Falstaff Brewing Company in Omaha for 35 years. He then worked for Miller Brewing Company until his retirement. He was also a member of St. John The Baptist Catholic Church in Ft. Calhoun. When we lost mom, it was hard on all of us, but especially dad. Now to lose our father, it feels like we are losing our past. Here are some thoughts about our father……. • Anytime Dad would meet someone, he would always try to find out how they were related to him or if they were related to someone he knew. • According to Dad, if you were from Iowa, you were a good person. • Dad must have had a good childhood. He grew up near Underwood, Iowa, and was always going to class reunions, driving by the old farm place and spoke highly of the “farming days.” • Dad had three brothers and one sister. He loved them all. To this day, Pete, his only living sibling, kept in touch, and stayed close to our dad. Thank you, Uncle Pete, for being an amazing brother to our father! • Dad and Mom bought their home in Fort Calhoun in 1957. He loved his home and taking care of it. He was very proud of his property and took care of it until his dying days. If there was a way, we are sure dad would still be at the house walking around and taking care of things. • Dad worked for the Storz, Falstaff, and Miller brewing companies. Dad was a brewer for Falstaff for approximately 36 years. On our birth certificates, it states our father’s occupation as “brewer.” Not many people can list that as their occupation. He was proud to work in the beer industry and the love of beer has rubbed off on all his children! • John Deere and Chevy were dad’s “go-to” brands. Through the years, he had many Chevy vehicles and several John Deere mowers. • Dad volunteered for decades for the Fort Calhoun Fire and Rescue Squad. He was the founding member of the Rescue Squad in town. • Dad adored his grandchildren and always wanted them to know he loved them. • To this day, we still need Dad’s advice. Dad always had “ADVICE” for everything. Even though we looked for dad’s advice, and yes, sometimes it was unwanted advice, dad would not take our advice. He would ask us what we recommended, but then he would ask everyone else in town. He would take others' advice but not his children’s- must be a Gage thing. • Dad did not want to stop driving or to leave his beloved home. He didn’t want to give up his freedom - who could blame him? But in the end, he made the best decision. Thanks to all who kept in touch with dad; he was very lonely after mom passed, so those of you who gave him a phone call to check in or those who stopped by to see him- he was really appreciative. When our mom was dying, dad was an incredible caretaker to her. He genuinely loved and missed our mother greatly. We believe they are together again, and she is baking him those delicious cookies that he loved. Rest in peace, Dad- We love you. NO VISITATION MASS OF CHRISTIAN BURIAL: 10:30 am Wednesday, April 28, 2021 at St. John The Baptist Catholic Church. Social Distancing should be observed and face masks are recommended. INURNMENT: Private family burial. Military Honors conducted by Ft. Calhoun American Legion Post #348. MEMORIALS: In lieu of traditional remembrances, memorials are suggested to Ft. Calhoun Fire & Rescue. Sievers-Sprick Funeral Home Fort Calhoun, NE 68023 402-468-5678 www.sieverssprickfuneralhome.com

The family of Stanley Gage created this Life Tributes page to make it easy to share your memories.

Send flowers to the Gage family.