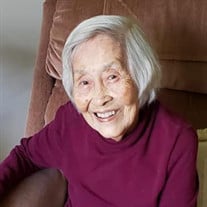 Yasuko Montgomery, age 91 of Springfield, OR. Born: December 12, 1929, Seoul, Korea. Died: December 25, 2020, Omaha, NE. Yasuko Tomotani Montgomery was born in Seoul, Korea on February 12, 1929. She is the daughter of Eizo and Teruko Tomotani and had nine brothers and sisters. Yasuko graduated from Seoul Girls School in 1944. That same year her Mom died of tuberculosis. As the eldest daughter she became the caregiver for her siblings. Yasuko met Ezra Montgomery in Japan. On September 10, 1950 they were married in Sapporo, Japan. Ezra was in the Army. After leaving Japan Ezra was stationed in Washington state. Ezra retired from the Army as a Master Sergeant and the family settled in Dexter, Oregon where he was a foreman at Georgia Pacific lumber mill. They had 3 children, Lilly, born in 1953, Lewis, born in 1955, and Lloyd, born in 1960. Yasuko has three grandchildren, Tina Lowe, Lance Montgomery and Leslie Montgomery and 4 great-grandchildren. Yasuko was involved in the local Grange and as a Cub Scouts/Boy Scouts den mother. She had a garden, enjoyed sewing, knitting, crochet, and playing cards. Yasuko became a United States Citizen on February 18, 1965. Yasuko’s husband of 19 years, Ezra, passed away from a heart attack on April 14, 1970. Having been a housewife she had to learn to drive, get a driver’s license, and seek employment outside the home to support her three children. She worked many different jobs over the years including selling Avon and caring for an elderly lady. Yasuko retired from Fred Meyer (a store similar to Walmart) as a stocking clerk. She made many good friends over the years. On December 27, 2013 Yasuko’s daughter Lilly passed away unexpectedly. In September 2015 Yasuko’s son Lloyd and her daughter-in-law Connie moved Yasuko to Autumn Pointe Assisted Living in Fort Calhoun, NE where she lived until she passed away. Yasuko was also survived by her many friends back in Oregon and was loved by all her family and friends and will be missed! PRIVATE SERVICES IN OREGON AT A LATER DATE Sievers-Sprick Funeral Home Fort Calhoun, NE 68023 402-468-5678 www.sieverssprickfuneralhome.com

The family of Yasuko Montgomery created this Life Tributes page to make it easy to share your memories.

Send flowers to the Montgomery family.